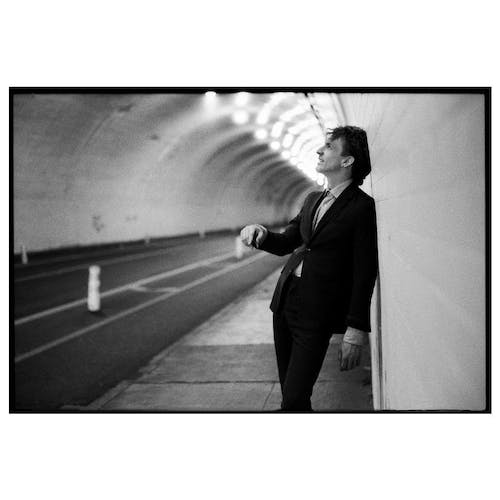 Looking to the past, following his fledgling years as a boy playing gut-bucket blues, manouche jazz, and western swing in bars and dance halls across Texas, he moved to NYC and released two solo EPs, Live from a Volcano (2013), and Heart Was Beat (2015). Shortly after moving to NYC, he met songwriter Adrianne Lenker, and after a year of fervent collaboration, they recorded two EPs, A-sides and B-sides (2014). The duo went on to circle the USA several times over in the orange velvet Van Bon Jovi, playing Appalachian school houses, Alabaman birthday BBQs, Arkansanian book fairs, Texan Star Parties, Massachusettsan cattle farms, Minnesotan fireworks displays, and so forth. From there they expanded into a four-piece outfit, Big Thief, and have since released two records, Masterpiece (2016) and Capacity (2017).

In the words of Mat Davidson (Twain):

“I’m going to tell you about Buck Meek the only way I know how. No bully here. I don’t take kindly to intruders, and in a such a devilish world as this, so full of trickery and illusion, you can bet your cannabis I take my sweet time to vet each and every guttersnipe that happens across my field of consciousness.

But it’s not every day that you find a 16th-generation Texan leaning on your banister and offering you a short-rib in the comfort of your very own home. How did he get there? I was alarmed. Yet, there was something unusual in his eyes… something you’re about as likely to stumble upon as you are a sleeping weasel. It was Trust. So, naturally, I invited myself into his traveling band and we hit the road.

I never had much use for friendship, but meeting a soul such as Mr. Meek gave me pause; he changed this old Buckskin - and I wager he’ll change you too.”

Buck Meek is a kaleidoscope of human relationships — of widows, daughters, flight attendants, best friends, bar flies, neighborhood heroes, and troublemakers — it illuminates mysticism in the temporal, humor unearthed in tragedy, the strength of vulnerability, and the words unspoken that elucidate love.

...faced an impossible question, to be answered at once by a kaleidoscope of wind, diffusing your bewilderment into thousands of spinning bulbs?

...awoken to hear the person sleeping beside you speaking a language they do not speak in their waking life?

...felt your legs possessed, to throw you across the room in shapes?

...lost your heart, only to find it on the bank of a cold spring, in the hands of a filling station attendant, or in the dust swimming through the light of your bedroom window?

Have you ever listened to Twain?

“A lonely day, I went outside to smoke awhile,

and think about a picture in a book:

He was laying in the grass in his suit,

as the angler posed in pursuit of the fish”

For the past decade or so, Mt. Davidson has cultivated his songs and sounds, attempting to create a bridge, a meeting place, between the terrestrial and the mystic. He is a ponderous and delicate sort of creature, short and vaguely leonine, who has spent most of his young life abiding in the midlands of transcendence.

“Oh to be there, the smell of her hair,

the deer swimming through the watery woods,

life won’t last long for those who hate it,

for those who love it, it lingers on like a dream”

Following its quiet self-release in 2014, his fifth and most recent LP, Life Labors in the Choir, has steadily gained devoted listeners throughout the globe and continues to blossom today. The album describes a marked evolution in an alluring yet strange and hesitant discography. Progressing from the bashfully childlike sounds of 2005’s Madeline, (now lost), through self-constructed garage multi-track tangles of Sleeping Tree (2007) and Almanack (2008), we hear the progress of a young man struggling to free himself from the shackles of depression and neurosis. In 2010’s Love is All Around, a distinct breakthrough can be felt in the form of a question that challenges the foundation of the doubt and fear running through the early music. This sudden evolution is in no small part owing to the addition of two musicians - Peter Pezzimenti (drums and vibes) and Ken Woodward (basses) - and a sound engineer - Adrian Olsen. The music really began to breathe.

“Free’d from doubt, my cigarette went out,

the sun came out and warmed up the house,

oh to be fainting into that painting,

as I wrap up the tune and bring it to you”

This fall, Twain will release a new record of songs - Rare Feeling - on Keeled Scales Records (Austin, TX). These recordings have been gently fermenting for an extended period of time, and are now ready for consumption. The foundation of the record was captured in a tool shed by the great magi-bard, S. McMicken (Dr. Dog), using ancient and secret methods of time distortion. The resultant reels were then brought to Richmond VA, where master engineer and sound-seeker Adrian Olsen guided the songs into completion. As with the previous LP, the band has labored to present a purely AAA analog disc, and is eager for you to experience the special magnetic warmth that results from the process. (We once again are indebted to the mysterious and mighty Paul Gold of Salt Mastering for his kind attention).

If you would like to hear some music, please head over to twain.band.

(Lyrics from “Freed from Doubt”, from Rare Feeling)