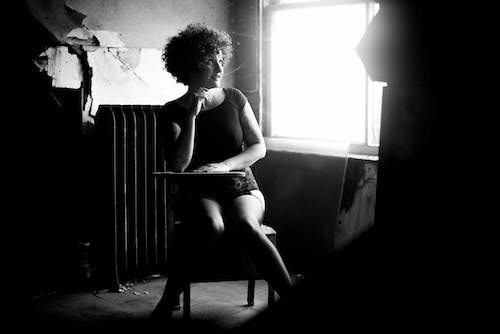 “Her lyrics are sexy, witty and sharp” –The Chicago Tribune

“A spunky singer-songwriter with a sense of swing to match her sense of humor.” –The Boston Globe

“Her smoky vocals recall Nina Simone and Billie Holiday, while her wit as a songwriter is in the spirit of Cole Porter.” -NPR

“Blanton rallies spirits in ‘Buck Up,’ a bright, John Print-worthy folk song…a singalong for the disputed and downcast, urging everyone within earshot to persevere.” -Rolling Stone

Buck Up, the new studio album from singer and songwriter Carsie Blanton, due out February 15 2019, opens with a siren. The warning – or call to (dis)arms – segues into the first notes of “Twister.” Finger snaps alone accompany Blanton’s smoky vocals, before piano, upright bass, cello, trumpet, and drums join the proceedings. You’re immediately drawn in to her riveting tale of natural – and erotic – disaster. Brimming with catchy hooks, sensual vocals, and lyrics boasting a gift for rhyme and meter, Buck Up is Blanton’s melodic mandate for survival following the 2016 presidential election: passion, lust, and humor. “There are two themes on this record,” says Blanton of Buck Up’s ten electrifying tracks. “One is the feeling of catastrophe happening in American politics, and the other is this feeling of personal catastrophe”: when you fall for “That Boy,” for example, a reckless wild child, the type who populate her life and imagination. Though Buck Up may be “basically about being depressed,” according to Blanton, “if there’s not a sense of humor or playfulness, I don’t want to listen to it. Music is about play.”

Over the past dozen years, Blanton has been making music that personifies play. Her work has been called “impeccably catchy” by critic Robert Christgau, with musician John Oates admiring her songs’ “sly wit and urbane imagery” that remind him of Cole Porter. She’s toured across America and Europe sharing stages with Madeleine Peyroux, The Weepies and others. Though based in New Orleans since 2012, the self-described “proud socialist” has been on the road since her teens. As a child in tiny Luray, Virginia, she began playing piano at 6 and learned guitar at 13. The budding songwriter’s life was forever changed when her grandpa sent her a batch of jazz recordings for her thirteenth birthday. “Billie Holiday, Nina Simone, Louis Armstrong – that’s when it started for me,” Blanton says of the gift two decades ago that remains “the most inspiring to me as a songwriter and a singer. I’d started performing and he wanted to make sure my musical education was well rounded.” She was deeply smitten with Holiday’s recording of Irving Berlin’s “How Deep Is the Ocean”: “I just love him,” she says of the composer, “and Cole Porter and Rodgers and Hart. They’re all masters of music and words.” Such influences would surface as Blanton began crafting her own witty lyrics and using jazz phrasing in her vocals.

“I’m talking things like the first two Nick Lowe records – I’m fucking obsessed by that shit, they’re beautiful, beautiful songs on those records. Then he led me to this guy Jim Ford who’s like a weird country-soul singer, he’s so good. And I’ve really got into Van Morrison way deeper than I’ve ever got into Van Morrison before.

“But I think the influences on this are definitely Nick Lowe and Van Morrison – I even tried to sing like Van Morrison on a lot of the songs, like how he repeats himself a lot. Those are the kind of bands I would never have liked in 1984… or 1994… or 2004 really.”

Naturally these new flavours and inclinations are filtered through the core Spiral Stairs aesthetic that served him so well over five Pavement albums, two long-players with his subsequent outfit Preston School Of Industry and eventually throughout his slowly-blossoming solo canon. We Wanna Be Hyp-No-Tized may mark a musical evolution of sorts but there’s no denying its source.

“It’s funny because you go back and remember things that fans would say to you and they’d mention Rockpile or they’d mention Van Morrison records or Roxy Music records and I didn’t have a frame of reference then,” the singer reflects. “But maybe that’s why people liked my bands in the first place, because I reminded them of the history of rock’n’roll, which is what it’s about. You’re always trying to take from the classics and give back and teach people.”

Kannberg’s solo career proper began with the first Spiral Stairs album The Real Feel back in 2009, and after taking a lengthy break following Pavement’s triumphant global reunion tour in 2010 he returned in 2017 with his acclaimed sophomore solo effort Doris & The Daggers.

That album scored Kannberg some of the most fawning reviews of his career – UK music bible Mojo espousing that “it's been a long journey, but Spiral Stairs has finally found his voice”, while Q Magazine called Doris & The Daggers “his most enjoyable music in two decades”, amongst many similarly positive critiques – and it’s from those same sessions that the seeds of We Wanna Be Hyp-No-Tized were sown.

Four strong songs that didn’t make the final cut on Doris & The Daggers – all notably featuring the drumming of Justin Peroff (Broken Social Scene) – were originally earmarked to surface on an EP, but when Spiral Stairs struck a rich vein of songwriting form in his adopted Mexican home of Merida on the Yucatan Peninsula he suddenly had the makings of something far weightier than an interim release.

Reuniting the bulk of the dream team who assisted him on Doris & The Daggers – bassist Matthew Harris (Oranger, The Posies), multi-instrumentalist Tim Regan and good friend Kelley Stoltz, as well as former touring Preston School Of Industry drummer Jim Lindsay – We Wanna Be Hyp-No-Tized is the most fully-rendered encapsulation to date of Spiral Stairs’ inimitable aesthetic.

“I’m pretty surprised at how well it all hangs together because I’ve always tried to keep everything pretty close,” Spiral reflects of the album’s protracted genesis. “But when you look at some of your favourite bands’ records they’re often working with songs that are five years old or eight years old, or songs they’d been working on forever and even songs they’d already recorded prior. So when I started working like that it was, like, ‘It doesn’t really matter, as long as they sound good’.

We Wanna Be Hyp-No-Tized is fun, infectious and musically compelling, while still managing to cover some hefty topics like the current rambunctious political climate and the devastating loss of loved ones, augmented by some tales inspired by various pop culture sources. It’s the best of all that’s come before combined with a newfound wisdom and appreciation of the classics, aided by some beautiful embellishments courtesy the skilled musicians at his disposal.

More than 25 years into his incredible musical journey We Wanna Be Hyp-No-Tized represents perhaps the archetypal representation to date of Spiral Stairs’ beloved canon – in these tumultuous times we’re living in that’s surely inspiration in itself.