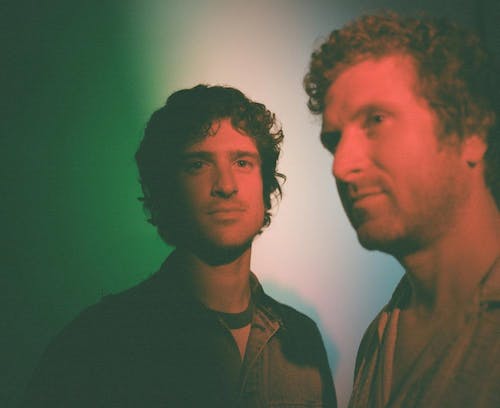 “It’s an amazing thing to work with your brother,” says Jonathan Rosen, one half of the breakout LA duo Cones. “When you know someone that well, when you can truly be yourself with them, when you can create together without inhibition, something indescribable happens.”

It’s that indescribable chemistry that fuels Cones’ spectacular debut album, ‘Pictures of Pictures.’ Recorded at the band’s own Honeymoon Suite studio, the record offers up an intoxicating blend of shimmering psychedelic exploration and muscular pop craftsmanship, complete with infectious hooks and deep grooves that simultaneously hint at everything from Big Star and the Replacements to ELO and the Bee Gees. The brothers draw on their radically different backgrounds here to remarkable effect, with each bringing their own unique history to the project in perfect complement to the other. The result is a whole far greater than the sum of its parts, a record that feels at once futuristic and vintage, spontaneous and deliberate, playful and profound.

Listening to ‘Pictures of Pictures,’ you might expect to find that the Rosen brothers—guitarist/vocalist Jonathan and keyboardist/producer Michael—have been playing together since childhood, but the truth is that they only began collaborating much more recently. Growing up, the two found themselves on completely different paths: Michael showed an early aptitude for classical piano, which eventually led him to pursue a degree in composition and music technology; Jonathan’s passion lay in the visual arts, and he spent much of his free time locked away in his room drawing.

“As a little kid, I wanted do everything except music,” says Jonathan. “When I was sixteen, though, I lost a friend to suicide, and I started writing all these poems and songs as a way to deal with it. My dad heard what I was doing and got me a guitar, and from that point forward, I was writing constantly.”

“I was really impressed with the way Jonathan got into songwriting and lyrics because I’d always been more interested in the technical side of things,” reflects Michael. “I loved programming and abstract composition and responsive sound art installations, but Jonathan always had this keen ear for classic pop melodies.”

After college, both brothers landed in New York City, but they each pursued their own separate endeavors—Jonathan worked as an animator and played in a punk band called Cardboard, and Michael launched an indie group called Icewater—until tragedy struck.

“We had a close friend named Grant who we’d known through high school and college, and he played with me in Icewater,” says Michael. “Grant was an incredible musician with a brilliant mind, but he passed away before we could finish our first record. No one could ever replace him—his spirit is still a really important part of what we do today—but after his death, we asked Jonathan to join the band.”

With Jonathan in the lineup, Icewater landed a spot on tour opening for and backing The Fiery Furnaces’ Eleanor Friedberger, and for the first time in their lives, the Rosen brothers found themselves on the road together.

“Touring with Eleanor was an amazing process,” reflects Michael. “We learned so much about the business from her, and the experience of giving life to someone else’s songs made us both much better musicians.”

The brothers moved back to LA in 2014 to write and record with Friedberger on what would become her critically acclaimed ‘New View’ album, and the more time they spent working together, the more they began to understand the special bond they shared and the unique way their respective strengths could fit together.

“Beyond the ‘cuteness’ of being brothers in a band, there was this unconditional love and understanding that allowed us to create better things together than either one of us could alone,” says Michael. “And by love, I mean that we knew we could rip each other apart and be complete monsters without having to worry about the relationship.”

Under the name Cones (a nod to traffic cone orange, Jonathan’s favorite color), the brothers released a series of early singles to rapturous response. KCRW hailed the music’s “easy breezy SoCal feel,” while Stereogum called it “wonderfully groovy synth-pop,” and Fader described the tunes as “golden” and “sunny.” Tapping into his visual side, Jonathan created a series of extraordinary animated music videos to accompany the tracks (he’s also animated videos for Friedberger, Toro y Moi, and Delicate Steve among others), capturing the off-kilter nature of the songs with trippy, kinetic images that flow and morph endlessly into each other.

The success of those early singles led the band to graduate from the sweltering practice space where they’d been recording to a friend’s nearby studio, where they could collaborate for the first time with an outside producer. After cutting an entire record there, though, the brothers sensed that something had been lost.

“We realized, with a bit of perspective, that what we made in that studio wasn’t a Cones album,” says Michael. “It was something else, something that will hopefully someday see the light of day, but it just wasn’t us.”

“We found that if we weren’t on our own soil, with the ability to go at each other and labor over everything in our own way, we didn’t arrive at the same magic,” adds Jonathan. “We lost that indescribable thing that happens when we’re uninhibited.”

By this time, Michael had completed work on a new studio he called Honeymoon Suite, so the brothers returned to their own turf and hit the ground running on ‘Pictures of Pictures,’ diving headfirst into a world of immersive and cinematic music, with playful, wobbly artwork to match. While the brothers are joined on the record by a rotating cast of friends including drummer Matt Johnson (Jeff Buckley, St. Vincent) and Brazilian singer/songwriter Samira Winter, the sounds on the album come primarily from the two of them alone. Press play and you’ll hear dreamy album opener “The Hole” set the stage for it all perfectly, introducing the record’s full palette of tones and colors like a road map for the journey to come.

“When I was a kid, there was this hole in my wall where I used to sit and imagine things,” remembers Jonathan. “Even now, I have this dream of trying to re-enter that hole in my wall and regain that innocence and freedom.”

That pursuit of creative freedom looms large on the album. The driving “Seeing Triple” wrestles with keeping the spirit of childhood alive, while the churning “Inner Voice” chases productivity and inspiration, and the easygoing “Laugh of the Party” revels in the simple pleasures we often take for granted. Jonathan frequently draws song ideas from dreams (the swirling “Nicemare” came from a recurring one about finding a soulmate who’s just out of reach, and the Beatles-esque “Flying Island” was born from a vision of visiting the brothers’ late friend Grant in the afterlife), and Michael’s production and engineering are suitably otherworldly to match.

“Jonathan’s songwriting and animations are beautiful in that they both have a sense of humor, but they’re also very deep and nostalgic,” says Michael. “I always try to make sure our recordings feel that way, too.”