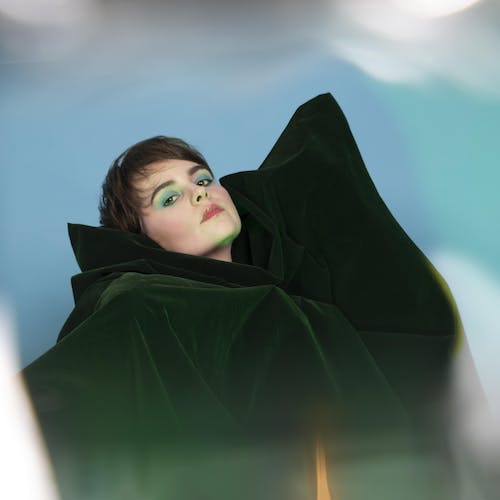 “What is your wish? What do you expect?” Cross Record’s self-titled third album begins with Emily Cross’s disembodied voice intoning from an otherworldly vacuum. In the three years since her last album, Cross has divorced, quit drinking, become a death doula, started the observational podcast “What I’m Looking At,” and toured and recorded with Sub Pop’s Loma, the trio she formed with Dan Duszynski on drums and Jonathan Meiburg (Shearwater) on guitar/vocals. On Cross Record, she guides the listener like a sonic Virgil, delivering a textured soundscape of meditative curiosity, akin to Low’s Double Negative, Broadcast’sThe Noise Made By People and Radiohead’s Kid A.

Having recorded 2016’s Wabi Sabi at home between work and sleep hours, Cross did the opposite for Cross Record, writing the album while living on a secluded part of Mexico’s coast. The collaborative atmosphere of Loma challenged Cross to experiment with her sound, detuning her voice and obstructing its clarity in specific moments. As such, Cross Record is primarily a showcase for Cross’s singing, as she pushes her range and engages with a multitude of approaches at every turn.

Following her time in Mexico, Cross returned to the states with vocal-heavy demos in hand and finished the record with musician Andrew Hulett and producer Theo Karon. Karon assisted with production and arrangements throughout the creation of Cross Record, and the songs realized their ultimate forms at Hotel Earth, his studio in Los Angeles. Though her voice is always central, Cross’s songs developed with percussion, string arrangements and expanded production. The instrumentation is as nuanced and experimental as her voice.

In her songs, Cross reconciles her present state of being with her experiences of the past few years. “PYSOL My Castle” was inspired by a visit to an overstimulating Mexican street market teeming with people, and describes Cross’s search for an unencumbered mindspace. “An Angel, a Dove” frames death as spiritual departure; a haunting synthetic soundscape gradually gives way to increasingly dissonant, urgent melodies as Cross envisions herself alight on a dove she suspects may be an angel carrying her from life. “The Fly,” which envelops the listener in filtered drum loops and synthesizers, considers the fragility and the resilience of the mind. On “Face Smashed, Drooling,” Cross mourns her alcohol dependence. “There was a sort of grieving process to quitting drinking,” she says. “I associated it with comfort, fun in the evening time and fond memories.” The song slips in and out of consciousness before resolving in a place of clarity. “I Release You” lives in the same sonic chamber as late-stage Talk Talk, and explores the acceptance of change.

Cross Record’s themes of departure and separation were inspired by changes Cross made in her career. After years of work as a nanny and in customer service, Cross recently embarked on studies to become a death doula. Similar to the services provided by birth doulas, a death doula helps clients navigate decisions and hardships at the end of life. In her new role, Cross has created a three hour ceremony called a Living Funeral, which guides participants through the rituals of their own deaths. Cross’s work in helping others face their greatest fears inhabits the same space as her art, which has always explored the metaphysical in the everyday. The eerie experience of listening to Cross Record and the unsettling sense of songs slipping from coherent grasp share these same sensibilities. The oddness of these songs is nonetheless honest and truthful, and to understand them requires acknowledging notions of alienation in ourselves.

“What is your wish? What do you expect?” Cross doesn’t know what your expectations are, and she is still figuring out her own. Cross Record attempts to examine these questions with a lucidity that sometimes blurs into the realm of the unreal. The trip is extensive and finishes where it started, but the foundation has changed, clarified; while no closer to an answer, we have a greater sense of the question.

Separate from the shows, but in complement, Cross will be performing Living Funerals along her tour route.