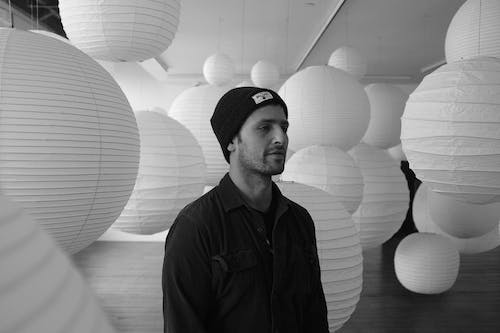 Drinker is the bicoastal recording project of singer-songwriter Aaron Mendelsohn and producer-composer Ariel Loh. The two met in Brooklyn in 2016, brought together by their shared love of artists such as Bon Iver, Fever Ray and James Blake. Out of that initial collaboration came 2017’s Happy Accident EP, described as “four tracks of chillwave inspired bliss” (Discobelle).

It was around that time that Aaron moved to LA. In spite of the huge physical distance it created between them, the duo has continued to create exciting new material. Two years of cross-country collaboration has produced the follow-up album, their debut LP Fragments which comes to you via B3Science Records. Lead single “Fragment II” reached #1 on HypeMachine and the wave of singles that followed have received support from KCRW’s “Morning Becomes Eclectic” to BBC1’s Radio Xtra. Mysterious as it is familiar, Fragments lulls the listener into a trance.

Along with the release of Fragments, 2019 has seen the evolution of the live band now featuring Mendelsohn, Emily Tooraen, Bobby Danubrata, Anina Denove and Parker Law.