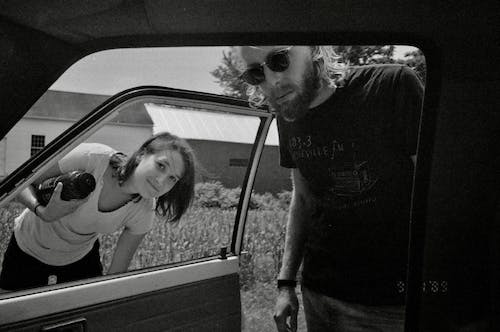 Dyado, (pronounced dee-ah-dough) is the project of east coast songwriters Louisa Stancioff and Matt Lohan. The two are cousins who reconnected later in life, and bonded over singing old country songs, and playing fiddle. Together, they have crafted a hazy, film-grain sound that phases between dreamy California beach days, and fall fields drenched in fog. Dyado sings songs about adventure, lost love, and walking the line between youth and adulthood in a life on the road.

in one sentence: "psychedelic wanderlust music with roots in both the south and new england."

Dyado, (pronounced dee-ah-dough) is an alt country band, currently based in Asheville, NC, formed by cousins Louisa Stancioff and Matt Lohan. The two grew up in different parts of the east coast, and reconnected later in life in mid-coast Maine through a series of fortunate coincidences. After re-meeting, the two bonded over songwriting, country music, and fiddle tunes. Together, they wrote and produced their first EP in 2016 while working summer jobs, and living at their grandfather's house in mid-coast Maine.

After more then a year of touring loops around the US for fun, and chasing an endless summer, the duo moved to Asheville, where they recorded their debut LP, Dreamcountry, a folk rock album that explores walking the line between youth and adulthood in a life on the road. Dyado has been touring constantly ever since, promoting their record, and supporting larger national touring acts like The Weather Station, and Izaak Opatz.

Recently, the duo began making inroads on their second studio album, working with producer Malachi DeLorenzo, who runs a small studio in Los Angeles's Echo Park. and is a founding member, and touring drummer of the band Langhorne Slim.