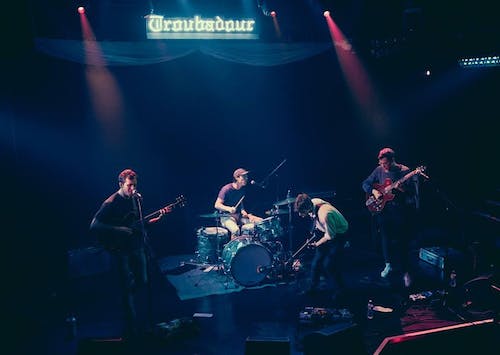 with Olivia Kaplan and Dylan Rodrigue

"Their music is unique. Jagged, but also soulful and melodic. A noted West African influence surfaces in many of the guitar constructions, but I also hear fragments of sound reminiscent of Ian Williams and co. via Pittsburgh through Don Caballero, Chicago thru Storm and Stress and finally Brooklyn thru Battles. There are moments of abstract harmonic complexity (Cobwebs) and beauty (Fall Back) that are unmatched, to my ears, by any bands around today." — Jeff Parker (Tortoise, AACM, Brian Blade Fellowship, etc.)

At once understated and astonishing, Fell Runner's blend of a garage-cool attitude and complex virtuosity is declarative of a unique voice on the L.A. rock scene. The four-piece take guitar rock and infuse it with literary sensibility, vibrant vocal harmonies, and expressive polyrhythms borrowed from West African studies. Fell Runner executes these embellishments without ever breaking the uninhibited drive that serves as the band's foundation, keeping their sound edged and urgent.

Centered around the collaborative relationship between singer-guitarists Steven van Betten and Gregory Uhlmann as well as close friendships to bassist Marcus Hogsta and drummer Tim Carr (The Americans, HAIM), Fell Runner formed in 2012. The band was conceived to satisfy a need to vent using the most primary and instantaneous effects of music. In it, its members found a space for visceral musical connection and honest lyrical exploration.

The band's self-titled debut was released on Orenda Records in August 2015 and it showed them crafting an exciting meeting point between bands like Dirty Projectors and TuneYards, tinged however with the dark moodiness of Deerhunter or Xiu Xiu. Of it, Record Rewind Play states, "what they've produced comes across as spontaneous and living, growing and evolving as the songs progress, with melodies and the rhythms that underpin them criss-crossing in a constant search for a stable center.” Lyrically, the album delivers cautionary musings and vivid Southern Californian landscapes which are bound up into introspective experiential snapshots. Fell Runner presents a picture of Los Angeles that minds the smog and clutter, maintaining an affinity for the organic.

Fell Runner has frequented Los Angeles clubs including appearances at The Troubadour, The Echo, The New Parrish and a month long residency at The Bootleg Theater. They have opened for artists Julia Holter, Big Thief, Luke Temple (Here We Go Magic), and Tortoise. Their debut album is out now on Orenda Records