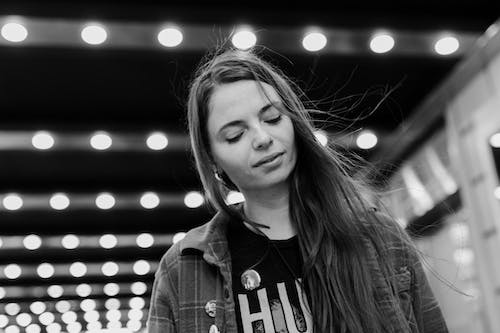 Bootleg Theater & What The Sound Present

Gracie Gray was raised in Los Angeles as the middle child of four siblings. She was homeschooled before college and began touring with bands while attending the Bob Cole Conservatory for a classical voice degree in 2016. Her solo project emerged with her bandmates’ encouragement. Together they would throw “Convocation” shows in the middle of the night where she tried out her first songs on guitar and piano. She left school before graduating and recorded her first EP “Black Clothes” at Revolver Recordings in Thousand Oaks with producers Jacob Williams and Mikal Blue.

Having written the tracks just before recording, Gray was beginning to set the pace for her visceral and honest songwriting with tracks like “space” and “g i wish u.” After touring her EP, Gray began to record her follow up album Oregon in a Day. It abandons clean- sounding studio gear for the raw intention and emotion of a bedroom-recorded album. Having produced and mixed most of it herself, each decision is reflective of her priorities: the songwriting and execution. Wanting to convey silence after loss, the opening track has notably sparse instrumentation leading to refrain “everyone’s gone away.” The following track, “dreams overwhelm me” speaks of how the heart takes time to detach from past relationships and how that resurfaces in our dreams. The fourth track “shades of green” has nylon guitar finger picking reflective of Nick Drake. Gray’s opening lyrics “somewhere in your eyes, I saw a green light” fondly remember moments of togetherness before separation. While the first four tracks of Oregon in a Day were recorded on her own (save for the lush violin of Jocelyn Raulston heard in “pile”), the following fifth and sixth tracks bring in elements of collaboration not heard anywhere else on the record. The pocket groove “holding up a candle” uses lo-fi guitar and layered vocals to convey the exhausting lull of repressed anger, tied together with the ending lyric “sometimes I feel angry, I fall asleep but I can’t scream.” The sixth track “morphine” takes a step back from personal experience and offers perspective. It is an ode to the person we all know that is passionately in the dark or light, always chasing some kind of dream with the line “you take it way too far, so no one’s love will ever reach you.” She then returns to the very beginning honeymoon stages of a relationship with the lullaby “howl,” where she gently asks “feel all of my love, feel all of my fear.” As her first full length album, Oregon in a Day is a bold “hello” to the world for Gray as an artist and producer.