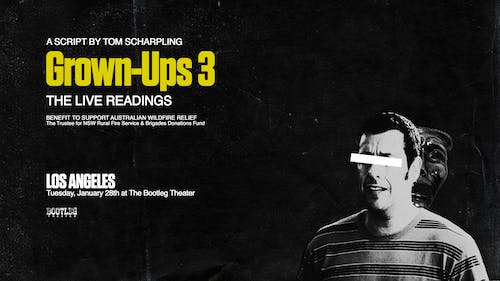 A Script by Tom Scharpling

Recently, comedian and writer Tom Scharpling's oddly touching and unexpectedly terrifying unsolicited Grown-Ups 3 screenplay set Twitter ablaze. As Vulture described, "Scharpling, an unexpectedly passionate Sandler fan, aspired to be faithful to the Sandman’s tone and style. Though he pokes fun at Sandler and his friends’ public images, the script is loving. And it really works!"

Now, in two cities, an all-star Best Show "Friends of Tom" cast will gather to celebrate this achievement in #NY and #LA to help support the NSW Rural Fire Service Sutherland Shire, who have been battling the decimating wildfires in Australia. It's a good cause and a dumb night of fun!

"The genius of Scharpling’s version of GU3 is that he takes the time to get the voices of each of his “characters” right" - The A.V. Club

"The result is like no Sandler movie, while also being very much like all of them...I can see Scharpling’s Grown Ups 3 working seamlessly into the canon, exploring themes that Sandler has long been interested in. And people freaking loved it, with Adam McKay saying it “would be on my top five list for the year” and Peyton Reed saying he wants to direct it." - Vulture