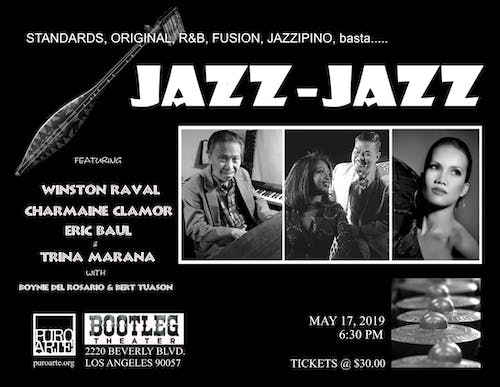 STANDARDS, ORIGINAL, R&B, FUSION, JAZZIPINO, basta….JAZZ-JAZZ’ is an evening of exciting Filipino-American jazz music that is being produced by Puro Arte, an artists-led initiative with the mission to catalyze community revitalization through the arts. This is the first music presentation for this non-profit organization which calls Historic Filipinotown of Los Angeles its home. This is also the first project that this artist collective has lined up for 2019.

In 2018, WINSTON RAVAL was bestowed by the Mannuunuri ng Pelikulang Pilipino with the first Natatanging Gawad Urian title to a film scorer. “Raval introduced a new musical idiom to Philippine Cinema,” says MPP. He also received a life-time achievement award from both the San Francisco Filipino-American Jazz Festival and the L.A. based JazzPhil-USA in recognition of his artistry and contribution to Filipino Jazz.

Celebrated by The New York Times as “a gifted vocalist” and by Los Angeles Times as “one of the important and original new jazz singer of the decade,” Filipino-American recording artist and cultural trailblazer CHARMAINE CLAMORE has earned her Queen of Jazzipino crown. With three consecutive albums in the Jazz Week World Music Top-20, she simultaneously made Top-5 on both the World and Traditional Jazz radio charts.

ENRIQUE ‘ERIC’ BAUL, JR. is a Los Angeles based baritone who loves to “Jazz mez around.” His repertoire includes an intoxicating concoction of jazz standards and jazzed-up popular and R&B tunes. He has been performing in the L.A. scene for the past decade at venues that include the world famous Catalina Jazz Club and Gardenia Supper Club to name a few.

With roots in soul, R&B and jazz, TRINA MARANA, a Los Angeles based artist released her debut album in 2015 titled Straight Ahead together with Winston Raval and Eric Baul. She uses her music to help the less fortunate children of the Philippines. She is also being recognized by the Maxx Promo’s as Best Jazz Artist for 2019.