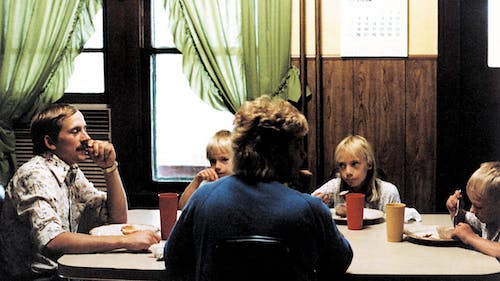 Join us, The Video Consortium, and Cinema Eye Honors, for a special 16mm screening of two revelatory, and timely documentaries about life in America.

In GOD'S COUNTRY, French director Louis Malle (ELEVATOR TO THE GALLOWS, MY DINNER WITH ANDRE) turns his camera on the farming community of Glencoe, Minnesota for an intimate outsider’s portrait of middle America. In 1979, the community is thriving, and the film unfolds as a beguiling humanist portrait of the individual day-to-day hopes, disappointments and eccentricities of the town’s residents. However, Malle, forced to abandon the project early, returns in 1985 (coincidentally the year Vidiots opened) to follow up, and finds that things have taken a dark turn during the Reagan era.

Academy Award-winning actress/director Lee Grant’s landmark, 50-minute documentary THE WILLMAR 8 profiles a group of eight women who, in 1981, carried out the longest bank strike in American history to protest gender discrimination at great cost to their reputations, marriages and livelihoods in the 14,000-person town of Willmar, Minnesota — 60 miles north of Glencoe.

We're thrilled to have our friends at The Video Consortium and Cinema Eye Honors joining us to co-present this program!

Please note: Stand-by tickets will be available night of show on a first-come, first-serve basis.

All ticket holders must be seated 15 minutes prior to show start time or tickets are subject to re-sale.

Full bar at the Bootleg Theater. There is street parking, or a free lot at the church across the street on Beverly/Roselake. Any questions, please email projectionsla@gmail.com.

Projections celebrates the collective experience of cinema, showing one-of-a-kind, original release film prints in an intimate environment. Each feature is preceded by a related short film, and Projections selects films which are best appreciated as a group to create a unique, community-oriented filmgoing experience.

A one-of-kind hub for film lovers, filmmakers, and everyone curious about cinema, Vidiots is dedicated to inspiring human interaction around film through preserving, growing, and providing access to its diverse DVD, BluRay, and rare VHS collection, showcasing the work of emerging and master artists, and producing unique film events and vital education programs. In Fall 2020, Vidiots will relaunch in its new home at the historic Eagle Theatre in Eagle Rock, with almost-10,000 square feet of entertainment and educational space, daily screenings and special programs, the full video store with DVD and BluRay rentals, concessions, and a light menu with beer and wine.

The Video Consortium is a global organization of more than 2000 non-fiction multimedia storytellers. VC was founded in New York City in 2013 and has expanded to include monthly gathering events in Los Angeles, San Francisco, Washington D.C., Paris, Milan, and London. The organization has become a vital networking resource for video journalists and documentary filmmakers worldwide.

Cinema Eye was founded in 2007 to recognize excellence in artistry and craft in nonfiction filmmaking. It was the first and remains the only international nonfiction award to recognize the whole creative team, presenting annual craft awards in directing, editing, producing, cinematography, original score and graphic design/animation. Cinema Eye presents and produces the annual Cinema Eye Week and Honors Awards Ceremony. The Cinema Eye Honors recognize feature and short-length films with an emphasis on nonfiction films made for public distribution, whether primarily theatrical, festival or broadcast. Cinema Eye seeks to encourage audiences to engage with nonfiction work that crosses all genres, whether observational, journalistic, activist, essayistic, light-hearted or provocative as well as those exciting works that blur the lines between nonfiction and fiction. Since its founding, Cinema Eye has sought to change the conversation that film critics, festivals and awards bodies were having about documentary film, shifting the emphasis from importance of topic to artistic craft. The Honors Ceremony is the culmination of Cinema Eye Week, a multi-day, multi-city celebration that acknowledges the best work in nonfiction film through screenings and events. The final four days of Cinema Eye Week take place in New York City, where a series of events bring together many of the year’s most accomplished filmmakers. The 2020 Cinema Eye Honors Weekend takes place January 4 - 6 in New York City.

Bootleg Theater is a year-round inclusive art space for original, boundary-defying live theater, music, and dance performances born from the diverse cultural and artistic landscape of Los Angeles. Bootleg supports and collaborates with the best of established and emerging music, theater, and dance artists to create daring multi-disciplinary live experiences that are striking, contemporary and non-traditional.