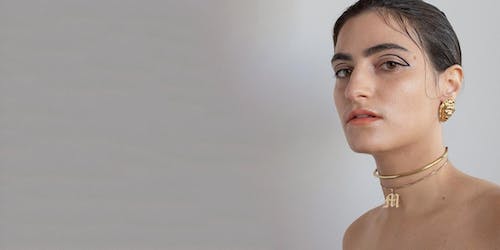 Watching her onstage, that brown bob of hers whirling like a cyclone as she unleashes her brash and husky riot of a rock voice, it’s hard to imagine Mattiel Brown was ever anything but a natural-born performer, a tried-and-true self empowered presence.

“Honestly though I never even believed I could do this all,” Mattiel, one of rock’s most thrilling young talents, says. Still, dig deep and she’ll admit to those times when she’d let herself dream: of one day stepping onstage, gripping that microphone and showcasing her skills. Then, she imagined, could at last let it all go, unleash that deep-seeded passion of hers for melody and rhythm and intricate storytelling and channel her pent-up ferocity into something real and palpable and powerful.

“But,” adds the soft-spoken singer, whose youth was shaped by an eclectic range of Music - from folk to punk and rock to hip-hop - and who for years only sang for her mother in private, “I remember thinking all along, “Yah, I would love to do that but it’s out of my wheelhouse, right?”” Mattiel pauses and smiles as if to say she now knows she was capable of becoming a masterful rock frontwoman all along. “I guess I just really had to break out of my skin.”

It’s a damn good thing she did: following encouragement from Jack White during a chance encounter in Nashville with her chief musical inspiration and eventual touring partner, Mattiel made the crucial decision to jumpstart her musical journey by writing and recording with her now-longtime songwriting partners, Jonah Swilley and Randy Michael. Less than five years later the band stands as one of the most singular and buzzed-about acts in rock music. Mattiel is no longer a teenager so unsure of her talent she was afraid to sing in front of strangers but rather performing for rapt audiences across the globe in the wake of the band’s acclaimed eponymous 2017 debut LP, released via Burger Records; wowing viewers with their fiery TV shows like last year on “Later… With Jools Holland” and more recently “Last Call With Carson Daly”. And now, they’re gearing up to release their highly anticipated second album, Satis Factory.

“It’s all still wild to me,” Mattiel admits with a laugh of her whirlwind past two years. “It’s so incredible knowing I’ve invested my time in something that has really started to

work.” Swilley chuckles when hearing of the singer’s typically humble take on the present day. Having become Mattiel’s most trusted musical ally and bandmate since they first began writing together in 2014, he’s seen her evolution firsthand.

“I believed in her from the get-go,” Swilley says. “Because when you hear her sing” - a grizzly blend of Grace Slick and Screamin' Jay Hawkins with the ferocity of a punk-rock head- Thrasher - “you instantly know it’s for real.”

Mattiel, for her part, is hardly one to sing her own praises. But having seen their debut album (released on iconic indie Heavenly in the UK and Europe) be so embraced by such well-respected outlets like the BBC’s Radio 6Music , even she can let herself admit her collaborators may have been right all along. “Randy and Jonah were so confident about how well my debut would be received,” she recalls. “They were like, ‘The real music fans are going to get this.’ And they were right.”

While she may be patting herself on the back, Mattiel’s recent success has most importantly given her the confidence and creative ammunition to go for broke on Satis Factory. To Swilley’s ear, the album is “a true rock n’ roll record,” with timeless influences ranging from The Clash to The Velvet Underground and even hints of Roger Miller.

“It was a completely different experience than the first album,” he says. “It was a lot more about trying new sounds out and putting weird keyboards through amps. It was a little more experimental where we’re having fun playing with different sounds.”

Mattiel acknowledges their new LP is a hard-hitting and occasionally bruising affair, what with her voice regularly sizzling above searing, serpentine guitars (“Heck Fire”). But on a deeper level, she says, the album is a collection of highly personal and thematic stories. Satis Factory, she explains, is an exploration of the never-ending search for self-gratification. And until recently, having worked full-time as a graphic designer for technology firm MailChimp while simultaneously pursuing her musical dreams, it’s a struggle she knows well.

“I spent about a solid year-and-a half juggling both jobs full-time,” she explains, and the idea of finding pleasure in the process of self-discovery is a concept she directly explores on the reverb-drenched “Millionaire.” The first song she penned for the album, the droney jolt of self-reflection directly wrestles with her love-hate relationship with the voyage to personal and creative fulfillment. “Some people become satisfied doing one thing for a very long time, and don’t have the impetus to pursue anything else,” Mattiel says of the impetus for “Millionaire.” “But I’m happiest when I’m continually searching for that satisfaction even though I may never reach it. Because if I’ve totally reached it, I know I’m doing something wrong. It means I’ve become too comfortable.” Moments later, a similar sentiment is dished up on the garage rocker “Berlin Weekend,” with Mattiel snarling, “And when the time comes to get down and invest/Get the same house and the same yard and a white picket fence/What now and what then when you’ve got a means to an end?/What are you gonna do then?”

For Mattiel, learning to honor her achievements remains a work in progress; it’s something she admits to only acknowledging when onstage and hearing her lyrics sung back to her by her ever-growing audience. “I wish that I had more time to enjoy the “It’s all happening” part,” she says, “but I’m busy doing so many different things.”

Yes, despite her growing profile the self-admitted perfectionist has remained extremely hands-on with all facets of her career. “It’s very hard for me to give someone free creative reign on something unless I know them very well,” Mattiel admits. To that end, the multi-talented artist served as co-director alongside filmmaker Matthew Addington for the music video to the album’s jangly guitar-anchored lead single “Keep the Change.” Shot at an old cement factory outside Atlanta, and finding the singer dashing wildly among old machinery, Mattiel says shooting the mesmerizing video “kinda felt like running around inside a video game with all the tunnels, catwalks and passageways.” In other words, she was into it.

And now, despite the excitement surrounding Satis Factory and a forthcoming tour of North American and Europe that kicks off in May at Third Man Records and finds the band gigging in locales from Montreal to Madrid, she and her longtime musical compatriots are keeping their eyes forward.

“We’re just trying to keep on challenging ourselves and put ourselves in uncomfortable situations to make good music,” Swilley offers of Mattiel’s promising future. “This is something I always thought I had inside me,” Mattiel says. “I suppose when the time wasright these things fell into place as they should.”

Only once in every blue moon comes an artist that seems so familiar yet out of space as Calvin Love. Like a stranded space captain locked in a cockpit recording his final thoughts. The young charmer arrives an enigma, a strutting, crooning contradiction: as menacing as he is magnetic, blending obsession with the beauty of artifice and the inner systems of real and natural things. It’s this infallible match of the authentic to the inventive that make Calvin Love’s work so strange and inviting.