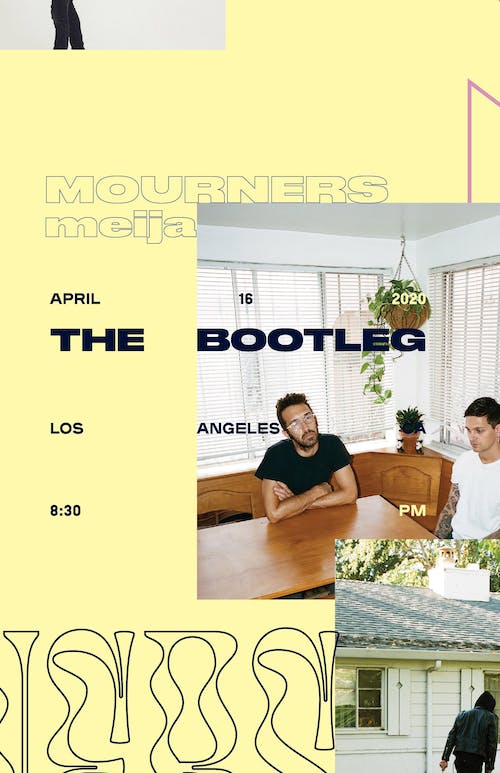 Mourners makes music for the alienated. Mourners writes songs for the overworked, underpaid, uninsured, overly medicated and socially awkward. Mourners makes music that captures the collective sigh of the survival of life. And they do it with a twist of sarcasm. Mourners was born out of a years long friendship between Jarrod Gorbel (Night Terrors of 1927, The Honorary Title) and Will Noon (fun., Straylight Run). After knowing each other from touring in former bands together, they got together to make something heavy. Their initial release of demos through 2018 received attention across playlists on Apple and Spotify and their first official single “Rich” was released in November 2019 followed up by “Die Like This” in January 2020. The band will continue to release singles through 2020, in a time we most need it.

Under the guise of Meija, LA based producer and songwriter Jamie Sierota makes music for our collective inner child. His synth-drenched, indie pop adjacent brand of rock mines the simple moments we tend to ignore, those that tend to mean far more than we'd like to admit. His new EP, "So Long, Kid” digs into these themes more confidently than ever, ranging from nostalgia verging on desperation, earnest declarations of love, to sardonic political views, all in just five tracks. With write-ups from Complex UK, Earmilk, Ladygunn and songs featured on Spotify’s “All New Indie” and “Indie Pop,” Meija is back in the studio and showing no signs of slowing in 2020.