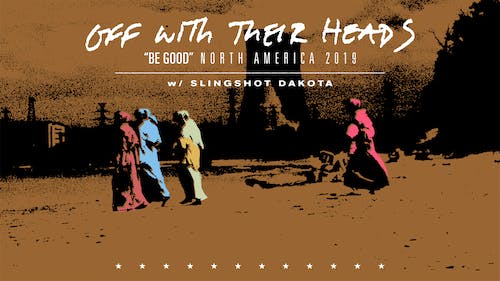 with Slingshot Dakota, No Win

Off With Their Heads is the project of Minneapolis native Ryan Young, operating out of Chicago, IL, featuring Kyle Manning, Rob Swartwood and John Polydoros. Having toured with everyone from Bad Religion to Municipal Waste, Young has learned that in order for him to maintain his ethics he tells his bandmates that "playing a show in front of 6,000 people is no different than playing a house show," and you can tell by the group's countless live performances that this isn't just lip service. "I'm proud that I have pretty much maintained my core beliefs over the years," he explains. "Opening for my heroes is cool but that's their crowd and I have always been about carving my own part through all of this."

Despite the fact that Off With Their Heads have performed everywhere from Jacksonville to Japan over the past decade, it's clear that even if OWTH never left Minneapolis they would be doing the exact same thing just as passionately. "Everything involved with this band has become larger and more successful than I could have hoped for," Young admits, citing signing to Epitaph as one of these milestones. "The only goals I have for myself and OWTH is to continue to make music that I care about, try to push myself physically and musically and continue to be able to do what I love for a living.

With the energy and sound of a full four-piece band, Carly Comando and Tom Patterson –– the husband and wife team that make up Bethlehem, Pennsylvania’s Slingshot Dakota –– craft unapologetic, heavy pop tracks that showcase their years of experience and punk influences. Although Carly is on the keyboard and Tom is behind the beats, to define the band as a keys-and-drums duo isn’t quite right. Carly writes songs as if there were a guitar and a bass present and translates how to mimic the sounds on the keys. Combining a robust low-end with sweet and delicate melodies, Carly makes full use of her heavily effected keyboard while also providing vocals that are, in turn, sweet and polished or earnest and raw. Tom fills out the sonic middle ground with his drum kit, knowing just when to hold back, and when to let loose and wail away. It’s a little bit pop; it’s a little bit punk; but it’s 100% fun.