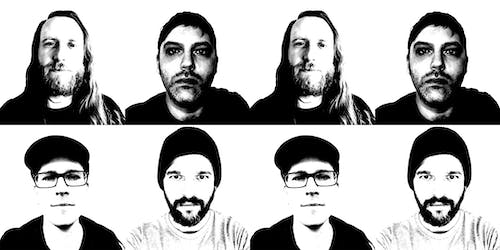 with Slingshot Dakota, No Win

Off With Their Heads is the project of Minneapolis native Ryan Young, operating out of Chicago, IL, featuring Kyle Manning, Rob Swartwood and John Polydoros. Having toured with everyone from Bad Religion to Municipal Waste, Young has learned that in order for him to maintain his ethics he tells his bandmates that "playing a show in front of 6,000 people is no different than playing a house show," and you can tell by the group's countless live performances that this isn't just lip service. "I'm proud that I have pretty much maintained my core beliefs over the years," he explains. "Opening for my heroes is cool but that's their crowd and I have always been about carving my own part through all of this."

Despite the fact that Off With Their Heads have performed everywhere from Jacksonville to Japan over the past decade, it's clear that even if OWTH never left Minneapolis they would be doing the exact same thing just as passionately. "Everything involved with this band has become larger and more successful than I could have hoped for," Young admits, citing signing to Epitaph as one of these milestones. "The only goals I have for myself and OWTH is to continue to make music that I care about, try to push myself physically and musically and continue to be able to do what I love for a living.

With the energy and sound of a full four-piece band, Carly Comando and Tom Patterson –– the husband and wife team that make up Bethlehem, Pennsylvania’s Slingshot Dakota –– craft unapologetic, heavy pop tracks that showcase their years of experience and punk influences. Although Carly is on the keyboard and Tom is behind the beats, to define the band as a keys-and-drums duo isn’t quite right. Carly writes songs as if there were a guitar and a bass present and translates how to mimic the sounds on the keys. Combining a robust low-end with sweet and delicate melodies, Carly makes full use of her heavily effected keyboard while also providing vocals that are, in turn, sweet and polished or earnest and raw. Tom fills out the sonic middle ground with his drum kit, knowing just when to hold back, and when to let loose and wail away. It’s a little bit pop; it’s a little bit punk; but it’s 100% fun.

Danny Nogueiras had one simple motivation for the 10 songs that make up downey, the debut album by his band NO WIN – honesty. This candor is evident from the very first notes, but with each subsequent listen the songs dig deeper and deeper, attaching themselves to the listeners own emotions and experiences until they’ve become shared memories. “I worked to the bone on this record,” says Nogueiras, “I make this kind of music because I love it genuinely, and I want as many people as possible to enjoy it.”

downey takes its name from the Southern California city Nogueiras grew up in. “It’s a good representation of where I come from, and it’s nostalgic for certain elements of the past while still being sad about them,” he says. downey is a compendium of glory days and melancholy memories, of hopes for a future already passed, and dreams that may still one day be realized. It’s the perfect summer record, but it’s also the perfect end-of-summer record: from the glorious, melancholic power-pop opener “After Your Legs”, to the energetic, full-throttle wonder of “Endless Scan” and the laidback splendor of “Shelley Duvall”, all the songs are inspired by Nogueiras’ personal memories, but have a universality to them, too.

Perhaps the best example of this is the wistful yearning of slacker-pop ballad “Being Teen”. ‘I know a bar where we can drink after close / Anything to keep from going home,’ sings Nogueiras in a beautiful, gentle lilt. ‘I know a spot where we can hide / Let’s get loaded and listen to “Pale Blue Eyes”.’ It’s a gorgeous moment of innocent and romantic escapism, a movie perfect snapshot of young love and the folly of youth, but with the added wisdom that, despite how things seem, it’s never going to last.

At the same time, downey is an album that also looks forward to new beginnings, in both a metaphorical and literal sense and which lives in the present as much as it looks back on the past. Mostly written over the course of a six-month period in the LA apartment Nogueiras was sharing with his wife, its songs capture a true sense of what it means to be alive, and all the wonder and the sadness that entails.

That’s something accentuated by the shimmering, sumptuous production of the record itself. The first album made by Nogueiras at Balboa Recording Studio in LA – which he built himself – it was recorded with bassist David Jerkovich (Kind Of Like Spitting, Novi Split), drummer Jeff Enzor (ex-Joyce Manor) and lead guitarist Juan Liñan and mixed by acclaimed producer/engineer John Goodmanson (Blonde Redhead, The Posies, Sleater-Kinney), it bursts and blooms with a vibrancy that’s a far cry from what NO WIN sounded like when, having left party punks FIDLAR, Nogueiras started it as a solo project some four years ago. “This feels like such an important thing,” he says. “It’s a culmination of so much work and years of doing other things and being in the studio and working with bands and so many different emotions and songwriting and time. It feels great.”

Using the album as a way to explore his new studio space, Nogueiras – who has also produced records by Together Pangea, No Parents, and Mean Jeans and toured in Waterloo Teeth alongside members of SWMRS – took his time to make sure that everything on downey was exactly as he wanted and had envisioned it to be. While NO WIN did release a debut EP in 2015, it’s this record that really represents what the band are all about right now, both sonically and thematically. “I got to really indulge in making a record,” says Noguieras, “which I think so few bands get to do now because budgets are small and records don’t sell the way they used to. After making records with so many bands, NO WIN was my very stubborn approach to wanting so badly to make my own music again and get back out on the road. When I started it, I was like ‘I know how I want to do this, I know that I don’t want to make my first record until it can be done what I consider the right way.’ It’s me being stubborn and hardworking and just waiting for this opportunity.”

That, combined with the powerful emotional punch of its songs is what makes downey a truly special record. It retreads the past with the eyes and wisdom of the present to create a collection of moments – of places, of emotions, of people – that all combine to make us who we are now. Even if you’ve never been to Downey, it’s an album that anyone and everyone can relate to, even if their life experience is totally different, because it’s an album that captures the true essence of human existence, no matter who you are, where you are or where you’re from. “I want people to walk away from this record with a weird mix of emotions,” says Nogueiras. “I’d like someone to say that what I think is the saddest song on the record makes them feel super happy. I want it to be ambiguous and mixed and I want them to feel happy and sad. I want it to be a weird and honest mix of real human emotion.”