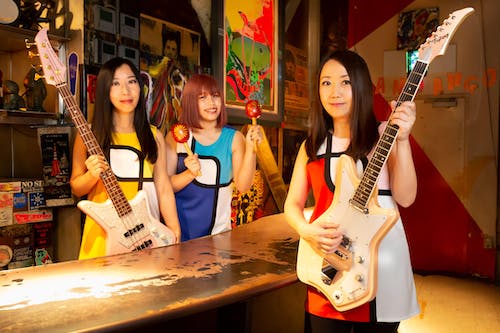 Since their pure DIY beginnings in 1981, Osaka, Japan’s Shonen Knife have been building a faithful following of music enthusiasts and the alternative rock elite. Their relentless journey secured the band’s place as one of the pioneer ambassadors of Japanese rock music and culture on the international stage.

The band features original members (and sisters) Naoko on Vocals and Guitar, Atsuko on Bass and Vocals and introduces their newest member, Risa, on Drums and Vocals. In 2019 the trio charges ahead towards their 4th decade of international touring and recording with their 19th  studio release “Sweet Candy Power” on Good Charamel Records in North America and Europe. Naoko describes the “Sweet Candy Power” album: “This album is homage to my favorite 1960’s and 1970’s rock music. Also I put all of enjoyment, entertainment, joyful and delightful from me into songs. Inspired by my experience during tours and my daily life, I wrote lyrics with fun and a little bit of ironical viewpoint. I hope people get happy through this album. “Sweet Candy Power” features 10 brand new songs including the fist single/video “Dizzy” and the title track “Sweet Candy Power”.

Shonen Knife continued to tour worldwide, sharing the stage with bands such as Nirvana, Redd Kross and Sonic Youth offering performances at London’s All Tomorrow’s Party, Austin’s Fun Fun Fun Fest, Fuji Rock Festival, Pop Montreal and Lollapalooza. In support of their newest release the girls will be touring in Europe in May/June including Primavera Sound and are in the throes of planning a 2019 North American tour this FALL.