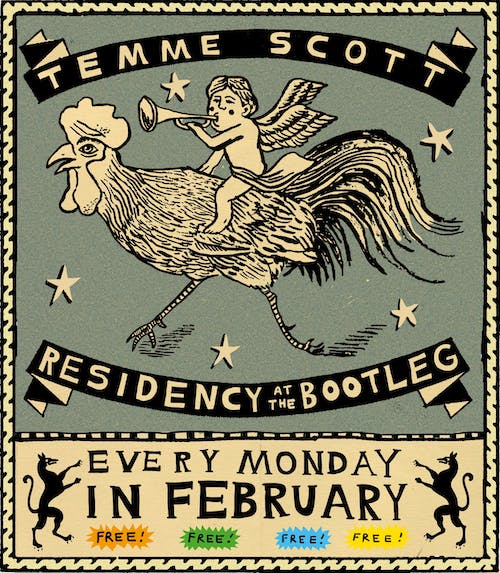 Growing up in Baltimore, MD, surrounded by the subliminal power of nature by way of alpine ski racing and regular family camping trips, L.A. based Temme Scott has always soaked up the world around her like a sponge — displaying her musical and emotional sensitivity in the songs she creates.

Since she was young, Scott has had a knack for sonic arrangements. At the age of 15, she pursued her Baltimore-based band Say Chance, which later garnered the attention of Career Artist Management and Paradigm Talent Agency in NYC. After two years of touring and significant exposure, the band dissolved, and Scott took the chance to move across the country to attend school. She wanted to start over, to cultivate a sense of individual authenticity — something that the burgeoning band’s dynamic hadn’t allowed her to do on account of their young age and the massive amounts of industry pressure placed on them. Discouraged by the idea of pursuing music professionally, Scott put it all aside and attended junior college in San Luis Obispo. Later, Scott transferred to UCLA to study psychology. However, while studying Spanish in Buenos Aires, she re-discovered her love of playing live after playing a great deal of solo shows in various cafes around the city. Upon her return to UCLA, she immersed herself in the vibrant house show scene in Westwood and immediately started booking shows and investing in a new solo project.

Her musical inspiration stems from her passion to depict untailored emotion through sound. With folk-based guitar licks, pop intonations, and Americana sensibilities, she seeks to write confessional songs that accurately represent herself, while displaying a heavy splash of brute strength, soul, and grit. Oftentimes, she finds herself collaborating with like minded producers and songwriters — inspired by the way that others interpret the world and how a pervasive sense of community brings people’s strengths together. In trying to make a big city feel smaller, Scott founded a monthly series of carefully curated lineups called Silverhouse Songs. Since its inception, Silverhouse has caught the attention of small businesses and talented artists who also seek to be a part of a warm and inviting community.