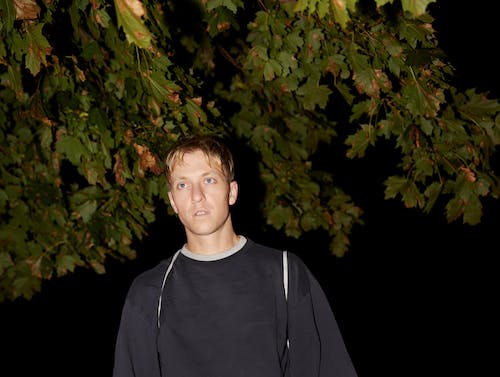 On Brutalism, the fifth LP from The Drums, a lot is different. It is quite possibly the best collection of songs in the band's ten-year career. The album is defined by growth, transformation and questions, but It doesn't provide all the answers. Brutalism is a form of simplistic architecture defined by blocks of raw concrete. Brutalism is rooted in an emotional rawness but its layers are soft, intricate and warm, full of frivolous and exquisitely crafted pop songs that blast sunlight and high energy in the face of anxiety, solitude and crippling self-doubt.

In 2017, The Drums put out its first record as a solo project. Abysmal Thoughts belonged to Jonny Pierce alone. It discussed his painful divorce. Since, he has returned to New York and now lives between there and LA. "I felt my work in LA was done. I was exhausted, depleted and sabotaging myself, partying so much but in reality running away from pain. It was a downward spiral." He wanted to deal with unresolved facets of his relationship with himself so he did therapy. "It was do or die," he says. "Figuring out what it is that makes me happy, and acknowledging that I deal with depression." He looks at Brutalism as an extension of self-care. "In order to take care of yourself you have to ask questions. Those are the things I needed to confront. It's interesting talking about the past, dealing with things that are long overdue. I'm delivering something unsure and unclear."

Even the fact that Brutalism sounds intentional, focused and efficient is a symbol of how Pierce's prioritizing of his own health and wellbeing has bled into how he makes music. For the making of this album, between his lake house in Upstate New York and a studio in Stinson Beach, California, Pierce was more open than ever, keeping his control freakery at bay, working with others to produce and record the album. He brought in Chris Coady (Beach House, Future Islands, Amen Dunes) to mix it. If there was a guitar part he wanted to write but couldn't play, he brought in a guitarist. It's also the first Drums record with a live drummer. Delegating freed up Pierce's time to produce a more specific vision.

His intentions were rooted in pop, as they've always been. Back in The Drums' previous iterations, however, the pressure was on Pierce to maintain the innocent and nostalgic sound of this surf-pop indie band and it didn't allow him to explore sex, drug use, darker emotions or how he felt currently. Abysmal Thoughts was the first occasion he had chance to do that. Lyrically Brutalism is another giant step in that direction. It's much more cut-throat. "I think there's a parental advisory sticker on the cover!" laughs Pierce. "I didn't have the courage to stand up for what I wanted before. I felt I had to keep things whimsical and that's not who I am. It feels empty." Sonically he had been devoid of external influences, so afraid of being accused of losing the purism of The Drums' sound. Now he's rediscovering music: everything from SOPHIE to 90s band Whale. They inspired the loop-based, breakbeat drums on 'Kiss It Away' and 'Body Chemistry.' "I used to think our songs sounded like they were held together by scotch tape. These are more bulletproof."

Every track on the album is a standout. 'Body Chemistry' is the most infectious, a song about learning how to not escape in other people. "I think you can't be intelligent and not be a little bit sad," says Pierce, of his own permanent rain cloud above his head. '626 Bedford Avenue' does what the best pop songs do: it alerts the nostalgia cog in your brain. It's a familiar melody that you think you've heard before, which works given the context of looking back on a specific time and place. 'Brutalism' is about a love so intense you feel destroyed by it. Pierce tends to find himself loving in a very extreme way that's almost harmful. 'Loner' documents the painful process of healing. "I don't want to be alone and I am scared of all the people in the world," he sings about not knowing how to socialize. A reassuring thing has been in rediscovering that Pierce was building a community in the intricate relationships he has with listeners. Now that he's alone in this project it's even more apparent.

"That's the one thing that's kept me going through this," he says. Brutalism is defined by vulnerability. It is truly pop at its core with thoroughly modern production. "I love pop but I feel that there's a sensitivity that's missing," he says of the landscape. Pierce wants to sacrifice ego in favor of tenderness. "I wanted to make a pop record where I'm not declaring how great I am," he laughs. "I'm questioning if I could ever be great? I'm a grown man saying: ' I feel more crazy than ever. I feel lost. I'm terrified of the future.'" With 'Blip Of Joy' he ends on a note of hope. "I hope that one day I won't deal with depression, that I can love in a way that doesn't feel scary," he says. That's why you can dance to Brutalism and you can laugh to it too. Even though it's heavy.

In many The Drums has always belonged to Pierce, but it wasn't until 2016 that he reclaimed ownership. Back in 2008 Pierce and his childhood best friend Jacob Graham conceived of a collaboration that was never intended to become what it did. "Jacob and I were writing pop songs. I didn't think anybody would hear it. I recorded it with broken equipment and guitars that were out of tune." Pierce put it on MySpace and weeks later interest was lining up. "I scrambled and found the first people I could to turn it into a band." The runaway train lasted four albums. Pierce never felt he belonged. "Sex, drugs, rock'n'roll and hanging with my buds doesn't resonate with me. I never found community in that," he says. "I was so terrified that if I hit the brakes even for a second everything would fall apart. I was trapped with a sound I wasn't crazy about, stuck in a culture I didn't connect with. I'm finally in my mid 30s starting to take care of myself."

The past year has been transformative. "I don't think I'll ever really find myself," he adds. "I don't think people do. I don't think there's a day that you wake up and you go, Now I know who I am. The best way for me to be an artist is by taking a goddamn minute, being still and listening to what it is that I want and need." It was a real year of growth for him, but growth towards what? "I don't really know, and that's OK."

Ashley Clue, musically known as Cowgirl Clue is a Southern California based electronic producer who originated from Austin, Texas. Her music is described as a "Vada Vada" take on dance - pop electronic music. Clue demonstrates slippery vocals layered on top of interplanetary synth rhythms, bubblegum bass lines and faerie stomp beats to create a playful yet sophisticated sound. After starting her music career at 17 DJing DIY raves and small clubs, she now takes influence in her production from Drum and Bass, J-Pop, Jungle, Techno, and Electronic Dance Pop music. Cowgirl Clue's first release titled single "Cherry Jubilee" was a gateway to her innovative, yet tongue-in-cheek bops. Soon after, she released a debut EP, "Limelite" on cassette with Burger Records. To follow, she released a few singles like "Utopia" and "Taxi Taxi" which represent Cowgirl Clue's musical vibrance and enigmatic energy. May 2019 she released her first full length album, "Icebreaker". With singles and music videos to support the album, "Icebreaker" and "Twin Flame" also carry Clue's visual aesthetic in tandem with her music. In 2017, Cowgirl Clue began playing shows in Southern California as well as booking her first small tours to SXSW and the West Coast. Throughout Cowgirl Clue's musical career, Clue has supported musicals acts Mac Demarco, Crystal Castles, CHAI, The Garden and Dorian Electra."