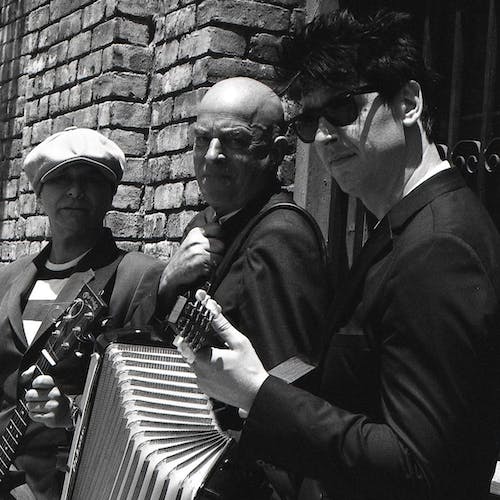 with The Eagle Rock Gospel Singers

The Walker Roaders are James Fearnley (The Pogues), Ted Hutt (Flogging Molly) and Marc Orrell (Dropkick Murphys). They released their first self-titled album on 23rd August 2019 on Ginger Man/Beverly Martel Label Group. Produced by Hutt, the tracks were co-written by the trio with lyrics from Fearnley. The recording line up is completed by producer Brad Wood (Liz Phair, Smashing Pumpkins) on bass, Kieran Mulroney on fiddle and Bryan Head on drums. The band have played several shows in Los Angeles but this is their first recorded music. The album, played by seasoned practitioners of the Celtic-punk brotherhood, combines accordion, mandolin, fiddle, guitar, bass and drums in a storm surge that lifts all boats as it threatens to wreck them.

This 9-track LP spans the Celtic-punk genre, as both originators and renowned practitioners of the style. From a scathing breakneck ballad of defiance and dread – ‘Lord Randall’s Bastard Son’ (hewing close to Dylan’s ‘A Hard Rain’s A-Gonna Fall’) – through songs with spacious melodies telling tales of dispossession and desire, including an homage to Rod Stewart and the Faces, ‘Here Comes The Ice’ at a latitude well north of balmy, and a tolling waltz ‘The Blackbird Only Knows One Song’, drawn from that well in the Pogues’ repertoire from which were winched such songs as ‘Kitty’ and ‘And The Band Played Waltzing Matilda’.

The three met in the US where they all live. Fearnley and Hutt started writing together, later to be joined by Orrell, whom Fearnley knew when Dropkick Murphys supported The Pogues on their Christmas tour of 2015. They adopted the name after a street gang from Fearnley’s youth in Manchester “who would slice your thumbprint with a pen-knife if they came across you and felt like it”.

James Fearnley was the last guitarist for the Nipple Erectors, the London-based punk band fronted by Shane MacGowan. In August 1982, MacGowan brought Fearnley in to be the accordion-player for a group to play Irish traditional songs fuelled by the punk ethos. The Pogues took off into international renown and ditched 12 years later after the ejection of their lead singer. Fearnley left the band in 1993 and formed The Low And Sweet Orchestra which released the critically acclaimed album ‘Goodbye To All That’ on Interscope Records. He then co-founded ‘a band of one-man-bands’,Cranky George (releasing their debut album ‘Fat Lot Of Good’ in 2016), with brothers Kieran and Dermot Mulroney. The Pogues, who inspired a generation of Celtic-punk bands, reunified in 2001 and played around the world until 2014.

Originally hailing from Croydon, Surrey, Ted Hutt was a founding member of Flogging Molly, their original guitarist and songwriter. Since leaving the band in the late nineties, Ted has produced upwards of fifty albums, for groups ranging from his own, Dropkick Murphys, GaslightAnthem, Old Crow Medicine Show (for which he won a Grammy), Devil Makes Three, MightyMighty Bosstones, Violent Femmes, Skinny Lister and many more.

From Worcester, Massachusetts, at age 17, Marc Orrell joined Celtic-punk band DropkickMurphys as guitarist, with a sideline in accordion and piano. After making four albums and after eight years on the road with the band, Marc quit – and headed to California. In Los Angeles he’s a prodigious songwriter, a fearless recording artist with a number of releases to his name and an unbridled performer, forming and fronting his own country-punk band ‘Wild Roses’.