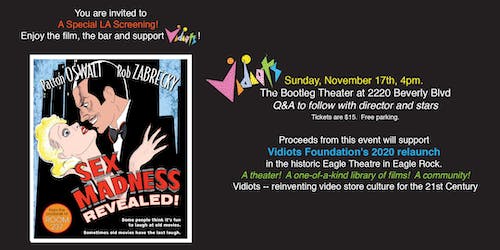 "A head-spinning Meta-fiction... An uncanny tale of madness, corruption, and the sinister side of Hollywood." Richard Whittaker, Austin Chronicle

Playfully exploring the outer reaches of cult film fandom, Sex Madness Revealed is both an ingenious twist on the audio commentary and a satire of the wisecrack track.

Using as its foundation a low-budget sex hygiene picture from 1938 (Sex Madness, aka Human Wreckage), we listen in as Jimmy Morris (Patton Oswalt), of the popular “Film Dick” podcast, hosts an irreverent conversation with the filmmaker’s grandson, the eerily emotionless Chester Holloway (Rob Zabrecky) while the film streams behind them. But as the on-screen plot unfolds, a much darker story unravels within the recording booth, about the sinister mastermind behind the film, and the unorthodox methods he employed.

Tim has written and directed SEX MADNESS REVEALED; DIRECTOR'S COMMENTARY: TERROR OF FRANKENSTEIN; and BEWITCHED? He has produced several films, including ROOM 237; AND WITH HIM CAME THE WEST, THE NIGHTMARE, and episodes of TOM EXPLORES LOS ANGELES. A collection of Tim's short stories, THE FERAL BOY WHO LIVES IN GRIFFITH PARK, was released this year.

Please note: Stand-by tickets will be available night of show on a first-come, first-serve basis.

All ticket holders must be seated 15 minutes prior to show start time or tickets are subject to re-sale.

Full bar at the Bootleg Theater. There is street parking, or a free lot at the church across the street on Beverly/Roselake.

A one-of-kind hub for film lovers, filmmakers, and everyone curious about cinema, Vidiots is dedicated to inspiring human interaction around film through preserving, growing, and providing access to its diverse DVD, BluRay, and rare VHS collection, showcasing the work of emerging and master artists, and producing unique film events and vital education programs. In Fall 2020, Vidiots will relaunch in its new home at the historic Eagle Theatre in Eagle Rock, with almost-10,000 square feet of entertainment and educational space, daily screenings and special programs, the full video store with DVD and BluRay rentals, concessions, and a light menu with beer and wine.

Bootleg Theater is a year-round inclusive art space for original, boundary-defying live theater, music, and dance performances born from the diverse cultural and artistic landscape of Los Angeles. Bootleg supports and collaborates with the best of established and emerging music, theater, and dance artists to create daring multi-disciplinary live experiences that are striking, contemporary and non-traditional.