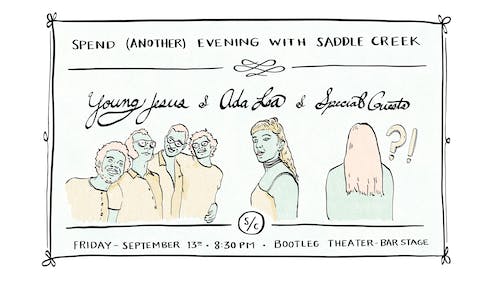 Spend Another Evening with Saddle Creek

In the 1980 documentary “Philip Guston: A Life Lived,” the famed neo-expressionist talks about a painting he keeps starting over. “It looked alright—but it felt to me as if it were additions—this and that and that,” he says. “What I’m always seeking is some great simplicity where the whole thing is just there.”

“That, to me, is the ideal feeling of existing,” says John Rossiter, singer and guitarist of the LA-based art rock quartet Young Jesus. “That feeling you pursue when you’re creating, when the world is opening up and things are on the cusp of beauty and revelation, but it’s just out of reach. To maintain that in the face of depressing or difficult stuff is what I’d like to be able to do.” This pursuit is what drives Young Jesus, and it’s documented on their upcoming record The Whole Thing Is Just There.

On The Whole Thing, which takes its name from the late painter’s words, Young Jesus combines a palette of indie rock instrumentation with a spirit of unhindered spontaneity to construct—and deconstruct—emotionally potent and inventive sonic landscapes.

Imbued with a sense of both desperation and discovery, each track unfolds like a deep sea voyage: beginning on the familiar ground of a conventional song structure before setting sail for the open waters of instrumental experimentation and plumbing the depths of the unknown in search of some conceptual treasure before heading back to port.

A Chicago transplant, Rossiter’s distinct songwriting approach is informed in part by the city’s emo and post-rock traditions. But since his move to Los Angeles in 2013, his bandmates—experimentally-minded keyboardist Eric Shevrin, bassist/composer Marcel Borbon, and jazz-head drummer Kern Haug—have all brought their tastes to bear on the band’s sonic identity.

The quartet spent the following years crafting a unique style of indie rock improvisation by emphasizing openness and vulnerability in their rehearsals and live shows—the first fruits of which are catalogued on the group’s Saddle Creek debut S/T. “S/T was the sound of us learning how to communicate, as players and as friends,” says Rossiter. It was the ensuing tour that brought their insular musical language to a new level of fluency. The period of creative outpouring that followed is where The Whole Thing was conceived.

With soaring melodies, spiraling polyrhythms, free-wheeling improvisation, and a raw, stirring vocal performance from Rossiter, The Whole Thing Is Just There is both prismatic and resolute—the sound of four individuals in pursuit of a common goal: to glimpse what’s just beyond.

As with so many artistic endeavors, Ada Lea’s debut album began as one thing and ended up as something else. The commonality of that process doesn’t make the story any less interesting, however, especially in the case of what we say in private — a beautifully colorful collection of profound pop songs that will be released later this summer via her new Saddle Creek home.

The Montreal, Quebec-based Alexandra Levy — who records and performs as Ada Lea — is also a painter and visual artist, and traces of her many creative abilities run throughout what we say in private. To her, music and visual art are different vessels for communicating similar ideas. Levy’s appreciation of female artists — including the writer Sylvia Plath, visual artists Frida Kahlo and Eva Hesse, and musicians Karen Dalton and Nina Simone — provides inspiration and guidance, informing her use of multiple artforms as tools for self-expression. Whether it’s creating music or art, “It’s a world that I can build around me and sit inside,” she says. Through all her work, Levy explores the concept of womanhood as it feels and looks to her, as well as love and how it transforms over time. She doesn’t shy away from exploring uncomfortable and painful emotions, either. With the brightness of love, strength, and hope contrasted with the darkness of loss, suffering, isolation, and abandonment, what we say in private is a varied and vivid record that constantly seems to shift in the light, bringing together all the intricate influences she’s collected over the years.

What we say in private began with a need to document the ending of an important romantic relationship. Following a tormented period of staying up all night (sometimes days at a time), frantically painting or writing songs as a means of coping, she journalled for 180 days in the hope of finding herself again. She conducted this period of analysis and introspection in private, like most of her creative pursuits, and the process eventually resulted in a rebirth: a rediscovery of self and a new sense of freedom and self-acceptance.

These chaotic feelings and the resulting catharsis are deeply felt in the final recording of what we say in private. Levy wanted the Ada Lea album to feel like a journal entry from those 180 days as she cycled through emotions. Throughout, she expresses feelings and thoughts that all humans experience behind closed doors and alone, but are conditioned to keep to themselves. This is reflected in the lyrics, the artwork, and the songs — together forming a public exhibition of deeply private matter. The album is a collection of raw, confessional, and at times messy emotions, presented to a society that can fear such realness, often favoring the uncomplicated, curated, and manicured.

Levy, who studied music in New York City for three years, initially envisioned what we say in private as a conceptual record formed from two distinct sides: one inspired by the sun and one by the moon. That idea waned over time as the songs began to take shape, and her initial sketches laid the path to somewhere, something else. “Over time, that idea started to feel wrong and out of place, and a distance had grown between me and the concept,” Levy says, upon reflection. “I followed the clues and pieces that inspired me, and they would bring me somewhere else, a slightly different direction. In the end I would just keep looking for more and more clues until it felt right to stop.”

The resulting Ada Lea record still carries echoes of that initial plan — the light/dark dichotomy mirrored in the public/private thematic nature of the album, which drifts in and out of the shadows, every flicker of the dark met by a searing leap into daylight, and an array of colors coming alive and changing song by song. Seeing feelings and scenes in colors, Levy brings them to life either as a song or a painting, depending on her mood, though she admits that translating these visions into musical form often yields strange or unpredictable results. “I think we all have that ability to see songs in colors and shades,” she says. “I definitely see a color palette, maybe even an entire image when writing a song.”

What we say in private truly comes alive thanks to the way these recordings utilize the very real world around them, rather than shutting it all out. Expanding the boundaries of the studio, Levy, alongside the record’s producer Tim Gowdy, found new and nuanced ways of allowing the songs to flourish. “It was all part of a bigger idea,” she says. “We stuck microphones out of windows in mid-January to capture the chilly nighttime sounds. We recorded snow removal trucks backing into the lot and airplanes flying overhead. We used voice memos, a piece from here and another from there. I had built a room with the demos of my songs and Tim helped to add a second level.”

As such, the album reverberates with human warmth, defined by the signature characteristics that can be found throughout. Lead track “the party” fittingly comes wrapped up in static white noise, a soft atmosphere lingering in the distance and gently surrounding the stark instrumentation that is gradually introduced. “wild heart” follows a similar path, the first couple of minutes gently rolling on but always feeling slightly off-kilter, a far off surrealness that comes to the fore for the song’s richly absorbing finale.

Elsewhere “mercury” is a subtle but propulsive near five-minute ride, its dark textures, chugging guitars, and scattered percussive nuances twisting and turning, stopping and starting throughout. “180 Days” treads a similar path, its elusive characteristics winding in and out of thick guitars and tender vocals, while “what makes me sad” takes a somewhat different turn, a swooning pop ballad that feels immediately more refined, all swirling guitars and a center-stage spotlight for her wonderfully distinctive voice.

Levy delivers something very special on what we say in private. Bold and daring, but also gentle and vulnerable, the album finds new ways of presenting its vision from one inspired idea to the next, a big leap into the wider world with passion and exuberance.