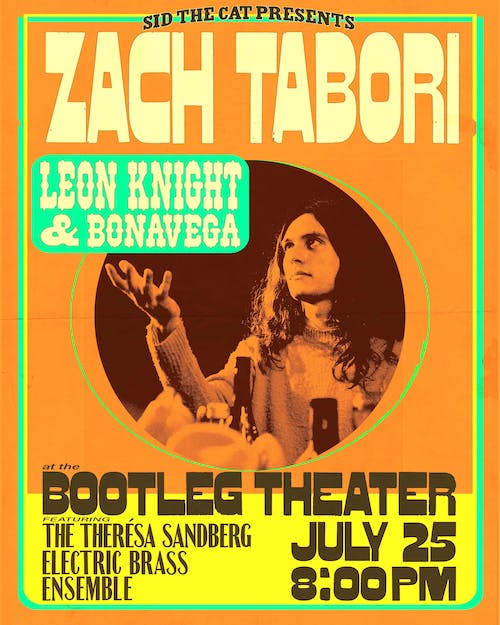 Zach Tabori doesn’t like being referred to as a prodigy. In fact, that title might make him cringe. He’s not egotistical. He’s not conceited. But he’s talented, and he has been since his youth. He began working in the music industry as a teenager, doing odd jobs while he taught himself how to record, mix, arrange, and play a myriad of instruments. Now the multi-instrumentalist shows off his talents by recording and playing everything in the studio, from the Wurlitzer to the pedal steel. He’s also not afraid to bend genre boundaries, incorporating everything from prog-rock to Indian music in his sound. Though a one-man-band in the studio, Zach brings his music to life with a five-piece band. Grueling 10 hour rehearsals and meticulous attention to detail result in a captivating live show that showcases the band’s tightness, as well as its bandleader’s need to stay on his toes—every set incorporates an element of improvisation. When he’s not working on his own music, Zach plays guitar for SI Istwa and acts as collaborator/guitarist/producer for ¿Teo?. Oh yeah, he also scores films—including the 2016 Cannes Film Festival contending short, Midnight.

Extracting inspiration from Queen, Talking Heads, Led Zeppelin, David Bowie, Duran Duran, Reggie Watts, and The Screaming Headless Torsos, BONAVEGA established himself in 2015 as THE new look and sound of performance based, theatrical pop music. Focusing on entertainment he builds his sounds and songs themes, at his home studio, around ideas and subject matter that are very relatable but then tells the stories in a way that are dramatic and unorthodox in order to captivate the audience.

Underneath his gaudy, ostentatious shell however, BONAVEGA has a deeper, fully aware intention for his seemingly trite "song and dance.” Zeroing in on corruption in the church and mocking bigotry with his sensual, homo-erotic, dance moves, the high society music industry and religious advocates protest his cheeky songs and taunting stage antics. Both sides of the coin feel he doesn’t squeeze into their box and fear his almost flippant disregard for fitting in or following suit. Poised and outspoken, he defends himself as a result of, rather than a cause of, a stifling religious upbringing and a “square” objectifying society.

BONAVEGA, completely aware of the ever changing musical climate, has released genre defying EP's and singles that individually hold their own weight and almost completely disregard one another in a way that continues to push his overly-confident out of the box way of thinking about music and life. The only thing left is the future. BONAVEGA has plans for touring/festivals/and premiers. He asks his followers to keep their ears and eyes wide open for whats to come and to also, as always “Take it off your mind… and take it to the floor."