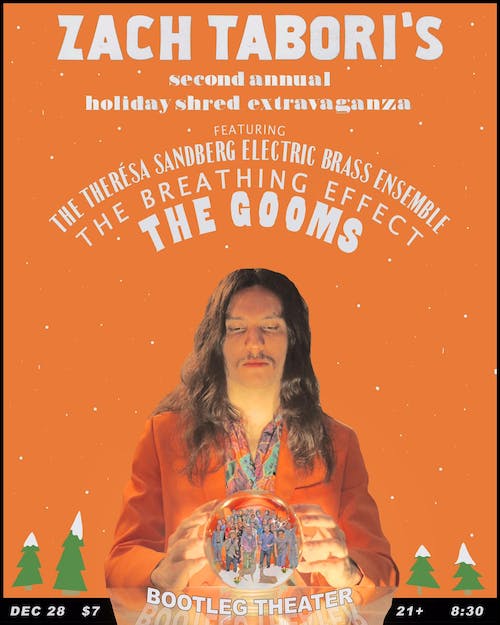 The Gooms, The Breathing Effect

Zach Tabori doesn’t like being referred to as a prodigy. In fact, that title might make him cringe. He’s not egotistical. He’s not conceited. But he’s talented, and he has been since his youth. He began working in the music industry as a teenager, doing odd jobs while he taught himself how to record, mix, arrange, and play a myriad of instruments. Now the multi-instrumentalist shows off his talents by recording and playing everything in the studio, from the Wurlitzer to the pedal steel. He’s also not afraid to bend genre boundaries, incorporating everything from prog-rock to Indian music in his sound. Though a one-man-band in the studio, Zach brings his music to life with a five-piece band. Grueling 10 hour rehearsals and meticulous attention to detail result in a captivating live show that showcases the band’s tightness, as well as its bandleader’s need to stay on his toes—every set incorporates an element of improvisation. When he’s not working on his own music, Zach plays guitar for SI Istwa and acts as collaborator/guitarist/producer for ¿Teo?. Oh yeah, he also scores films—including the 2016 Cannes Film Festival contending short, Midnight.

The Breathing Effect is the music of Harry Terrell and Eli Goss, two lifelong friends and partners in music for over 10 years. Whatever melodies and rhythms exist in their minds ends up on their records. There are many influences and familiar sounds, including jazz fusion, experimental rock, funk and soul. They make this music for all those who are willing to listen, with love and care

The Gooms are a Los Angeles based garage rock band whose edgy and melodic sound derives from a die-hard love of surf, punk, jazz, and all that lies in between. Their off-kilter brand of noise rock coupled with catchy hooks and dirty instrumentation make them a force to be reckoned with. They won’t apologize for stirring a ruckus in your ear canals, but they will give you a hug.